Alchemy was the study and practice of chemistry in the Middle Ages from the 13th to the 17th centuries. The alchemists’ purpose was to transmute metals into, not common, but into pure gold. This pure gold symbol was also connected to an illumined soul. The medieval alchemist said that the “matter” they were dealing with also contained the spirit of God.

Carl Jung, the Swiss psychologist, used the term alchemy to mean any imaginary power or process that transforms one thing into another. He saw alchemy as a combination of chemistry and magic. He believed that the transformation that alchemists were looking for in the philosopher’s stone was to be found in man.

Jung also believed that the spiritual element of us is an organic part of the psyche – so you would, from his perspective, have your mind, consciousness, unconsciousness and your Soul/Self. These are the items that make up YOU. He had been known to say that man’s search for meaning raised us to the level above an ape. Like the ape, we could live on instincts alone, and unfortunately some people do, but the quest of the spirit in us to look for the knowable and the unknowable was what distinguished us from the ape. He believed that this quest for meaning was an organic part of the psyche. He also believed that this quest was responsible for the development of both science and religion.

He loved the universal nature of symbols and believed they led to more understanding of the personal and collective unconscious that surrounds us. He used metaphor to speak of the unknowable. He plugged into these symbols and how they would and could work on the psyche. Jung’s ego’s confrontation with figures from his unconscious is shown in The Red Book (2009) published by W.W. Norton & Company.

For instance, the symbol of the Divine Child for him (and for us) was and is the inner child of our unconscious. In his own psychological work, he remembered what activities he had enjoyed as a child and incorporated them into his adult life when he had his break with Freud and a mental breakdown. He had built stone houses as a boy. As an adult, he built a stone house. From this and other experiences, his inner child guided him to become the mature man and psychologist who developed Analytical Psychology.

He sometimes used Christian symbols to explain his psychology. God had created life from chaos. He believed that in the chaos and energy created by understanding the opposites in ourselves that this reconciliation of opposites was really alchemy. He showed us that the difference between madness and creativity lies in what is done by the individual with that inner experience of delving into one’s unconscious. He realized that the chaos of life was necessary for the achievement of wholeness which he called your hero’s journey or the individuation process.

So, your Self begins life in chaos. Through this chaos you learn to develop a sturdy well-knit ego that makes decisions and understands your feelings. We spend the first half of our life working on and with these confrontations of our own ego and from the confrontations with people and situations in our environment. And from these struggles for dominance, where our strength is tested, we realize what we can do by ourselves, what we can do with the help of others and what we cannot do at all.

Hopefully, the mature person discovers what he or she is fitted for by his or her own nature or uniqueness without losing energy in pointless strivings or useless regrets. The aspect of dream figures who resemble those people one knows in their everyday lives are clues which are being brought up from the depths of the unconscious in order to merge your conscious and unconscious. The goal is to find the pure, not the common, gold inside of ourselves.

Jung was raised in traditional Protestant Christianity. He realized that churches came from defensive positions that stated that their religion was the only true one and the basis for their claims was that the truth had been directly revealed by God. Jung believed that God revealed also to the individual and it was from this personal experience that people knew God. He believed that Christ undoubtedly represented the Self/Soul in all of us. For a Jew, a Hindu or a Muslim, they would have a different symbol for the Self. A thought from his Protestant Christian upbringing was that prophets had visions. When he was experiencing his mental breakdown, this thought helped him understand that he could be having visions. This helped him eventually to realize that he was not crazy.

He saw the Mass as containing the core, the mystery and the miracle of God’s transformation. He saw the Christian as receiving spiritual benefits of the Mass personally and also to improve the circumstances of his existence. Jung accepted Christ in his personal life as the One through whom he was redeemed. Jung also studied Archaeology, Comparative Religions, Eastern Philosophy and Psychology. He was truly “spiritual” during his life but not religious. The more one studies Jung, the more one can see that he incorporated the magic and mystery of Spirit into his psychology.

Jung knew that mystical experiences were puzzling to man. He called them numinous and believed they had a profound role in the process of individuation. Jung saw these happening in his patients generally after their analytic process had proceeded to some depth. He had his own visions. An anima (feminine) figure that came before him was that of Salome. She was blind. She did not see the meaning of things. From her visit, Jung was to confront his own anima as to what he didn’t see. Elijah came before him as the wise old prophet who represented intelligence and knowledge. These figures represented themes in his life he needed to investigate.

The most spiritual figure of Jung’s, to me, is Philemon who was a guiding spirit who came to him in a dream to bring him insight. Philemon gave him the idea that not all the thoughts in his mind were his. Philemon said that thoughts were like people, birds or animals. If we found ourselves among them, we didn’t think we created them so why did Jung, or why do we, think that we create all of our own thoughts? The process of speaking to and with his vision “people” and/or spirits is called active imagination and is also, I believe, one of his best creations. It is through our imagination and our active imagination that we bring real creativity and change into our lives.

Jungian Analytical Psychology is used by people who have had experiences such as extrasensory perception, precognition, the I Ching, Tarot cards, reincarnation, mediumistic experiences, etc. They need guidance about these subjects and believe that a Jungian psychologist will take their experiences seriously and they do. They, like Jung, want to understand these subjects in relation to the natural world.

Jung saw his office or consulting room as symbolically being represented by the alchemist’s laboratory. From this metaphor alone, one can understand how the alchemical process parallels the individuation process. Jung believed that two subjects, alchemy and astrology, were two subjects that preserved the “bridge to nature” regarding the unconscious and a certain moment in time in a person’s character development. I hope this brief description of Alchemy and Jung gives you some insight. But, the subject of astrology, I will leave for another time. Article filed in my PC office Jan 13 2016​

"Grandma-What Is a Soul?" By Rev. Karen Herrick, Ph.D 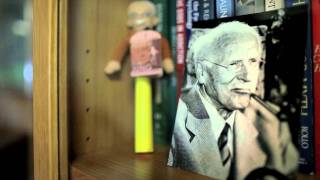 Dr. Herrick talks about her book "You're Not Finished Yet"

October 13 The Soul Through Time

Psychology and Spirituality of C.G. Jung, founder of Analytical Psychology